GLUTEN FREE! What the? Yes, another life test for us and a momologist test pour moi... During Asa's yearly bloodwork-up his results came back slightly positive for Celiac (this was June). This is one of the things they test yearly for in addition to Thyroid, Sugar, etc. for our little man and his magical 47 chromosomes. This is the ONE thing that I dreaded to hear (and I thank God it is only Celiac). Long story short, we had to have more blood drawn (thank you Auntie! Jenna went with to hold Ace's legs, it is a two man, uhm, women job) for a more in depth look. Yet again, Mr. Asa had NO symptoms, exempt for maybe his distended belly (oh, how we love the Buddha belly though!) It took almost a month and a half to get a conclusive YES, Asa has Celiac Disease. There is usually a Endoscope involved and a biopsy of the small intestine, but the labs were so positive his AWESOME GI doc did not want to put him through it.

So you ask, what is Celiac Disease? Celiac Disease is unique in that a specific food component, gluten, has been identified as the trigger. When individuals with CD eat gluten, the villi (tiny hair like projections in the small intestine that absorb nutrients from food) are damaged. This is due to an autoimmune reaction to gluten. Damaged villi do not effectively absorb basic nutrients - proteins, carbohydrates, fats, vitamins, minerals, and in some cases, water and bile salts. Hence, malabsorbtion causes malnutrition. Celiac Disease is more common then Rheumatoid Arthritis :-O

We have been Gluten Free for about 2 weeks. It is going okay, Ace has definitely lost weight which his CF Team might not be too keen on, they like to see him a little chubby. But I'm liking his slim belly which could also be less bloat being Gluten Free! His 3T jeans are fitting again! I hope to share some Gluten Free recipes as we travel this road and I'm finding more and more resources for Gluten Free manufacturers and items we already use. Ace's biggest struggle is bread and crackers, he is always asking for a cracker after daycare. He signs cracker for chips and the like and I can easily trick him into some Veggie or Pirate Bootie instead of a whole wheat cracker - ugh! I have been able to get him to eat Rice Cakes too! At first he did not want anything to do with them, he took one bite and spit it out. I told him to try it and broke off a little piece and stuck it in his mouth, he ate it and said "yum"! I have also done up chicken tenders with corn meal and McCormick's Chicken Montreal seasoning (you have to be careful with season mixes because they may have a no-no in them, it's all about reading labels (yawn)- they are pretty darn good if I do say myself! Brian actually said the other night when I made up a batch, "Why can't we all eat these?" - we could but then what would Ace eat? LOL 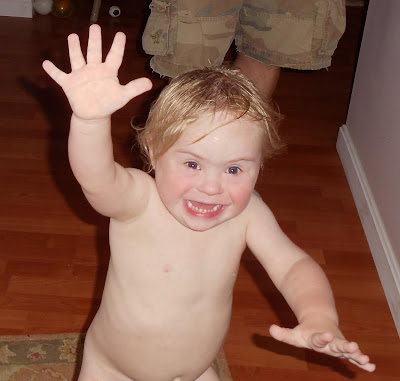