I have been slacking on the blog front. Life has been a bit hectic lately between business trips, doctor's appointments and working like a dog, there is not much left to me or the day by the time I roll home.
The weather this week has been un-real - GLORIOUSLY, un-real. For the past 3 days it has reached 80 degrees. It takes most of the day to reach this temp, but ahh how it feels good... Birds singing, trees budding and mosquitoes and ticks are already feasting.
The Ticks are going to hopefully be taken care of soon with our new members of the family coming in a couple weeks. Brian has been talking about getting chickens for over a year now. I kept saying no way I was going to have something else to take care of, but the more I read up on them the more I warmed up to the idea. Especially when I found out they eat ticks! I can't stand the nasty things and there has been consecutive days of finding ticks on the dogs. The mild winter has caused an early season and it is going to run ramped  around our house with all the wild life we have. Hopefully we'll keep the chickens safe enough in their custom built coop at night to ward off any unwanted guests.
﻿﻿﻿ ﻿﻿﻿
Doctor's appointments have consumed much time in the past couple of weeks. Firstly, Gracyn had an appointment at the Noggin Clinic. He has been diagnosed with a crooked noggin (Plagiocephaly- also known as flattened head syndrome, this can occur when a baby sleeps in the same position repeatedly. Fortunately, positional plagiocephaly can be treated without surgery and does not cause lasting cosmetic problems) and been prescribed a helmet. We go for his casting April 9th. We thought this was coming and had done all the physical therapy and I actually get up a couple times a night to change his head direction to his non-flat side, all of this and it's still flat-ish on the back right side causing the plate to move forward with a cute "little" bump of his forehead. The shape is the biggest concern, it is diagonally oblong so his hair over his left ear is actually hanging over his ear and his hair on the right side is above his ear. I'm keeping my fingers crossed that the helmet therapy only lasts a couple of months.
Asa had his follow up Hearing Test post-op ear tubes yesterday. They tested both ears and his right ear has had no change since his test before getting his ear tubes. So, either the tube is blocked some how or it has fallen out. I asked the audiologists if there was some sort of warranty, I was only half joking! We see the ENT next week to find out what the heck is going on... At least we've met our deductible for the year already!

I'll post on the progress of the Chicken Coop and it's going to be so much fun watching the chicks grow with the kids! 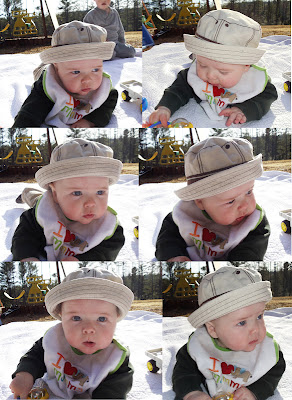 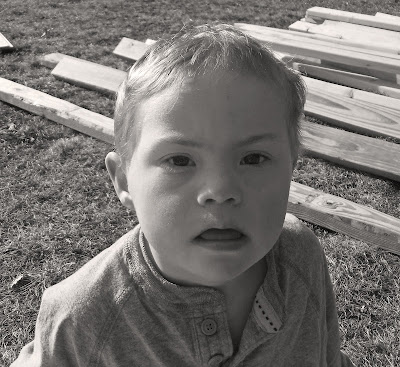