We are refining the art of Maple Sugaring. 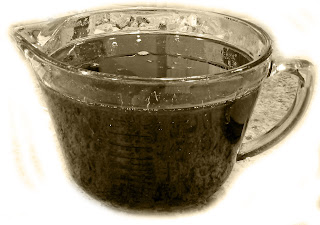 We boiled a little over 20 gallons of Maple Sap this weekend for 2 quarts of Syrup.
If anyone is interested, here is a little more info on Maple Sugaring and how it all started.

Maple sugaring has been an early Spring tradition in Vermont ever since the Eastern Woodland Indians discovered that maple sap cooked over an open fire produces a sweet sugar.
An old Iroquois legend describes the accidental discovery of the sugarmaking process. A hunter returned to his dwelling and found an enticing sweetness in the air around the kettle in which his mate was boiling meat. The fluid in the kettle, he learned, was sap and had been collected beneath a broken maple limb.
To make their sugar, the Indians would cut a slash in the maple tree and collect the sap as it dripped out. Logs were then hollowed out, and filled with the fresh sap. White-hot field stones were then added to cause the sap to boil. The Indians would process the sap through the syrup stage to end with crystallized sugar, which did not spoil when stored.
When the first European settlers arrived, the Indians traded maple sugar with them and eventually taught the settlers the secrets of the maple sugaring process.

The early settlers added their technologies to the process as seen in this antique photograph.
It was, reportedly, a French missionary who was the first settler to make maple syrup in 1690.
Other Europeans added their own technologies to the process. They bored holes in the maple trunks and inserted wooden or metal spouts. They used wooden buckets to catch the sap, and then carried the sweet water on shoulder yokes to the metal boiling kettles. Early settlers, like the Native Americans, saved their maple as crystallized sugar.
Maple sugar became the colonists own sweetener ending their dependence on foreign sugar. Also, it was never tinctured with the sweat of the southern slave as was cane sugar before the civil war.
Early in Vermont’s history, each family made their own maple sugar for personal consumption. Later, sugar makers started businesses to produce maple products and sell them to the general public. Technology changed again, and tanks on sleds were used to collect the sap and were drawn by horses or oxen. The sugar house was now their destination where the invention of the evaporator gave more control to the sugarmakers boiling process.

Wood fired boilers are increasingly rare with the benefits of oil fired burners.
Today, plastic tubing transports the sap from the trees to gathering tanks. From there it is transported to the sugar house where it is transferred to a central storage tank to feed the evaporator which boils off most of the water, leaving sweet, thick maple syrup.
Posted by Jackie at 4:25 PM