They say March comes in like a lion and goes out like a lamb. Well, Monday was proof the beginning of March weather is rather lioness. Northern VT and NH received over 2 feet of snow, average totals were 30". I am so glad we did not get this, but what we did get was rain, and lots of it. So much rain (on top of the mountains of snow we've already received this winter) that Sunday evening our basement floor drain was overflowing - into the house mind you. Our house is a split level raised ranch with our bedrooms on the lower level with bathroom, utility room and laundry. The overflow had made it into Asa's room and the bathroom, but our room was dry. We tore back carpet and sucked up what we could and went to Home Sleepo and bought a cap for the floor drain pipe. Bad News! If logic were working at this point we would of realized that this would force the water out in another place, how about every nook, cranny and hairline crack that damn water could find! We were floating, and all carpet is un-salvageable. The only dry spot is the laundry room because it is tiled (along with the bathroom, but that got the overflow coming out of the drain). So, for the moment the entire contents of our two bedrooms, utility room, storage area and closets is in my dining room. We've moved to higher ground in the spare bedroom upstairs, us in a not so full size bed and Ace on his mattress on the floor. Poor guy must of got confused in the middle of the night because Brian got up and found him sleeping on the rug out in the hall about 2 am. Never heard the little stinker open and close the door, but must of realized where he was and thought that was a comfy spot. We picked him up and put him back in his bed without even a eye opening. When he woke up in the morning I asked him "Why were you sleeping on the rug in the hall?" He had the most inquisitive look on his face and then said "Yeaah". Like "Yeah, I was sleeping on the rug in the hall wasn't I?"

On top of the rain, or rather, in addition to, there was ice probably about quarter of an inch. Then the wind starting blowing and with 2 carpet driers, 2 dehumidifiers and various fans running Mother Nature decided to throw another one at us. Yup, the power went out.... It was out for about 5 hours, but long enough to make you wonder whether it was coming back at all. Since we live in a pretty wooded area you could hear trees snapping as the wind was howling. Brian was heading out for a generator about the 2nd hour of no power, I happened to look out the window and cracked up, a tree came down across the far end of driveway - not huge, but too big to drive over. With the wind just roaring and freezing rain at vertical limits Brian attempted to move the tree with a strap tied to his truck (we don't have a chainsaw, whenever we need one we borrow my Dad's, but we were in a un-borrowed moment) and you guessed it, it didn't work and while his attempts failed another tree on the other side of the driveway snapped off and landed on the lawn. Pretty scary when you're only 100 feet away or so. At that moment I could hear the buckle of the strap smack the bed of his truck from the inside the house and read the various four letter words coming out of his mouth. But as the frustration rose to dangerous levels within 10 minutes we were saved by our good friends and cousins who showed up like knights in shining armor (that must of been the Budweiser can) with a chain saw, generator and 3 heaters.

Our power came back on about 6pm Monday night. The carpet is at the dump and we are waiting on the insurance adjuster to do their thing. More rain, snow and ice for Thursday and Friday and when I'm sitting on the beach a week from today this will all be a bad dream. 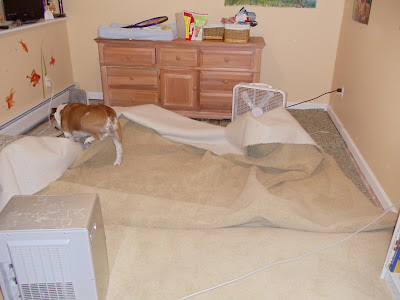 Our room with carpet torn out... 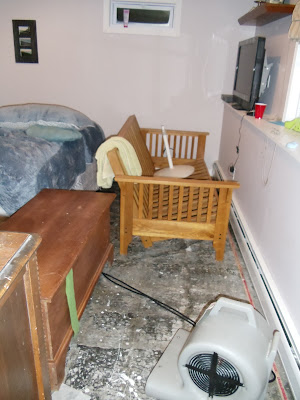 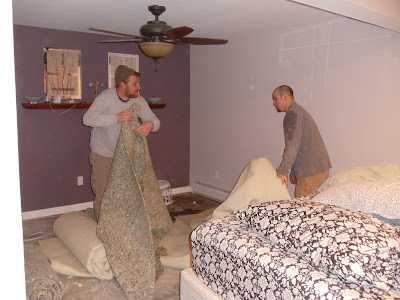