I'm sad, heartbroken, guilty and lonely. We finally had found a new home for Russ through the Bulldog Rescue League of NH. It all happened so quickly we kind of were left standing with our jaws hanging open.

Friday evening I had a call from the director for the state. She said she had found a family with teenage kids who just lost their bully in January, but they had a female pug. I was pretty hesitant of Russ going to a home with another dog, but the director assured me that Russ may not have any issues with a female and this was the only family she thought we might have a chance with out of all her applicants. She said the lady would give me a call and we could set up a meeting. I told her that we had put an ad in the paper and had received some calls already, she said "Oh, beware".

Saturday afternoon the perspective lady called. She sounded very nice and told me they were very familiar with Bulldogs, they wanted to come Sunday and meet Russ and introduce him to the Pug Lily. They lived 2 hours away and would be at our house at 9:30. Okay, anything to find Russ a good home was all I had in mind.

They showed up a little later then 9:30, but totally fine. The mother and 3 teenagers came in the house to meet Russ and of course he was a total spaz like he normally is around new people. He finally calmed down and they loved him. They had brought the pug Lily in with them but held on to her. Russell really had no interest in her, which was great. After about a half hour I said let's go outside and see how Lilly and Russ get along. Much to my surprise Russ still had no interest in Lily, she sniffed him and did the usually doggie greetings and Russ just lay in the middle of the driveway. GREAT! We all thought this was really awesome and thought that the fact she was a girl was the key. About 15 minutes went by and they said, we thinks he's perfect we'll take him home. I was totally not expecting this and it ripped my heart out of my chest, I was not prepared to say goodbye yet. A new family, already? I asked if they were sure that we could bring him to them next weekend and they said no it was fine. They thought he would be just fine... I went in the house and got his collar and as soon as I got inside the door I started sobbing, Brian was in the same boat and couldn't come outside to say goodbye. I collected myself and went back out and thanked them, handed his collar and gave him a kiss. I went inside before they drove away, torn about what just occurred.

Brian and I cried our eyes out and were feeling horrid when the phone rang a couple hours later. It was the lady saying everything was great that Russ rolled in the first mud puddle he could find and already had a bath. He and Lily were laying in the sun together and everyone was happy. The best news we heard all day. We were still sad, but happy for Russ. We decided to go to our friends house for dinner.

We got home about 8:30 and there were 6 missed calls, all from the same number. I swallowed hard and looked at Brian which I'm sure all the blood went out of my face at the same time. I listened to the voicemail and it was the lady saying to call as soon as we got the message. OIY! I don't think I could dial the numbers fast enough. She immediately said we have a problem, ugh. Russ decided to attack the pug Lily and then try to attack the husband as he was trying to defuse the situation. "Oh, Russy" I said. I did not dare ask if anything or anyone was hurt. They took him a their own will and I did not feel responsible for the situation since they "knew" what they were getting themselves into. I asked if they wanted us to come and get him, she asked if we could meet halfway in the morning and we did.

Russy took his last car ride yesterday it was the hardest thing I ever had to do. Brian and I decided that he was too much of a risk and a time bomb waiting to go off. The older he got, the more unpredictable he was. We couldn't take the chance of him hurting Asa and we couldn't take the chance of him going to a new home and hurting someone else. It was too much and we had given him so many chances and tried to correct his demeanor, but you could never predict when he would decide to be in attack mode. With the pug, the lady said he was totally fine all afternoon and then out of the blue he came across the room and grabbed a hold of the other dog. I'm sure when the husband came over to him he was in defense mode at that point and felt cornered. I'm at wits end. I feel betrayed because he couldn't be a good dog all the time. We loved him and pampered him and I think maybe that was the worst thing we could of done. But with Russy, if you sugar coated it you could get a lot further with him then being stern. I'm at a loss, we are at a loss. Asa hasn't asked for Russy yet, but he did everyday for the two weeks we kept Russ away from him. "Russ?" he would say and hold his arms up in the air and shrug his shoulders. I know he'll be wondering in the next couple of days and I will totally breakdown when he does.


Rest In Peace Russell... You were a good boy when you wanted to be and you were so darn cute.... 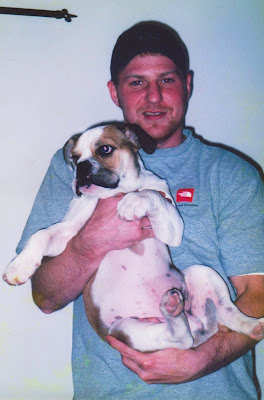 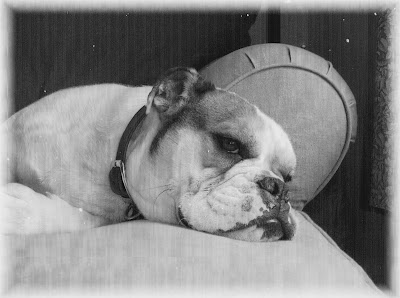