I know the post title sounds dramatic and in way it is. Our beloved friend for 8 years is leaving us and I'm really unsure of my feelings. 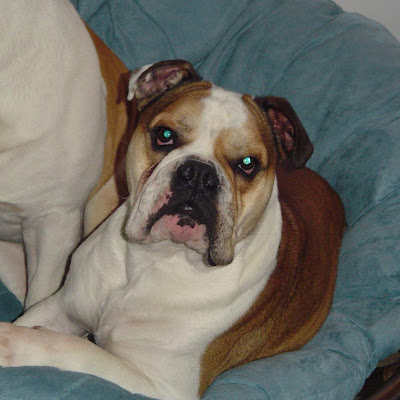 Russell was our first baby. We had him flown in from a breeder in Texas in August of 2003 at 10 weeks old, he was the cutest thing on 4 legs. That year we built a new house and Russ was the king of his domain. We always knew we wanted 2 dogs so in the fall of 2004 we brought home a white little flubber bully named Frankie. Russ and Frankie bonded immediately and Frankie followed Russ everywhere. 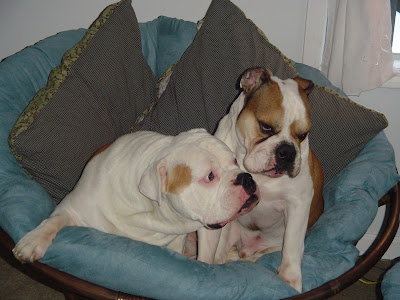 The following summer 2005 we were approached to adopt a older English Bulldog named Fraser. We were torn because we knew 3 dogs was going to be a house full, but couldn't say no to a face like this and he fit in like he'd always been ours. 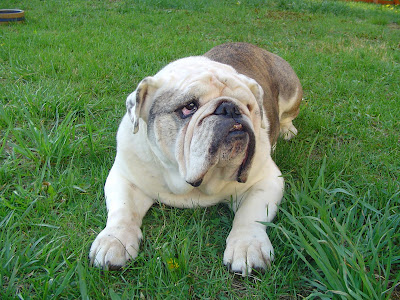 ﻿A few years went by and we were a happy bulldog family. Then Russell's feathers got ruffled and started fighting with Frankie whenever they were around each other. To this day they have lived separated, 4 years of keeping two dogs separated is a lot of work.
This past fall Russ decided he had a biff with "old man" Fraser and attacked him for no reason. Russ had to be separated from everyone. Things were going along okay, until this Saturday when I was giving Asa a hug and Russ came over to us and started to jump up (in attack mode) on the back of Asa. The Momma Bear in me pounced and I got to him before he got to Ace. I have never been afraid of dogs and I am not afraid to break up dog fights (dumb I know). Don't get me wrong, Russ is a wonderful dog when it's just him and you and NOBODY else, but somethings got to give and it's called giving away Russ. We have given him soooo many chances, but we can't take a chance of him hurting Asa. I know it's total jealousy but Russ doesn't realize Asa is higher on the pack chain then he is.
See, I'm torn. It breaks my heart to have to give him away, those sweet lips and rosebud ears, but there's NO WAY we can keep him and feel safe with him around Asa.
I've contacted our local English Bulldog Rescue, hopefully they know of a good home where Russell can go and be top dog again...
Posted by Jackie at 2:36 PM