It's been kind of a tough week. A transitioning time, and I'm not that great with change. Gracyn will turn 2 in a little over a week and I'm not ready for my baby to be an official toddler yet. He will be moving up a room at Daycare which is totally great for him but kind of a stresser for mommy! One of the requirements is to start potty training. I know this is not the norm at most daycares but apparently it is at our current one. I even went to lengths of checking out another daycare but Gray is in a good place and I will just need to suck it up...

There were a couple things that happened at school with Asa that irked me a little too this week. The biggest one was I had to drop stuff off yesterday morning for Ace at school. He had already arrived via the bus/van (he gets there at 7:30). After dropping the stuff off to his classroom Gracyn and I went looking for Asa out on the playground. We walked around the corner of the school and there was Asa, sitting on the sidewalk all by himself playing with sidewalk chalk while all the other kids were running around and playing with each other. My heart hit the ground when I saw him and I had to hold back the tears. We went over to him and he was ecstatic to see us. He stood up and I noticed how dirty he was and wet from the dew all over the morning grass and play structures. I know little boys get dirty but he had only been there 20 minutes! And he hadn't even been to class yet. There was a teacher right there with him, but it made me pissy because I make sure he looks cute and clean before he leaves the house every morning and he hadn't even made it 2/10's of the day... I know I'm over reacting but on the other hand I work hard and worry over his appearance constantly, it's important to me. Rant over and sorry Miss Patricia if you are reading this, I know Asa likes to be out on the playground in the morning :) He always has extra clothes in his backpack...
Update: I must of had PMS when I wrote this, actually I know I did. I KNOW Asa has TONS of friends. They actually fight over who's going to sit next to him in circle. There are so many kids that know him at school that when they say "Hi" I don't know who they are, but he does! Pardon my pissy rant, honesty can be kind of ugly sometimes (and I sure was :))

Onward, eye appointment. After a fight to dilate Asa's eyes, I think we got too many drops in. His eyes were dilated for 2 days. This is him in the car after his appointment with Mommy's sunglasses on. 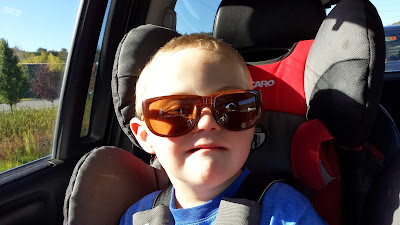 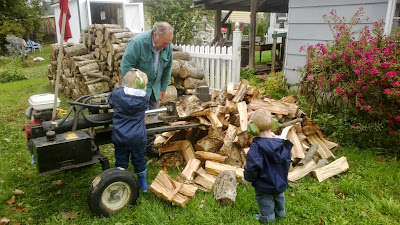 And our Happy Falloween decorations 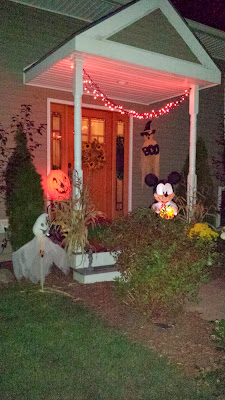 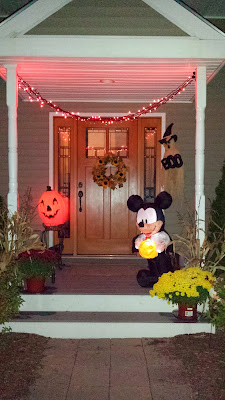 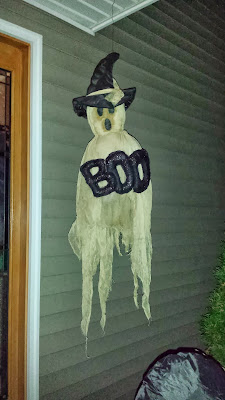 Lastly, what makes it all better... Gracyn at Daycare yesterday, he really does like where he's at. 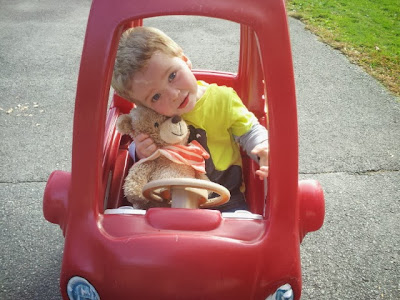 TGIF and the Buddy Walk is Sunday. Though it is suppose rain, we'll make the most of it!
Posted by Jackie at 10:35 AM