Today was the day

Fraser did not come to be ours until he was 5 years old. Our old house sits beside a walking trail and one morning I was out on our porch with Russ and a woman walking on the trail yelled to me. She asked me if we wanted another bulldog. I looked up and said "really?" and then proceeded to wonder what was wrong with the dog if someone was willing to give it away... Fraser's owner was a lawyer and he worked 10 hours a day. He adored Fraser. We set up a meet and greet at our house for the following week. Russ and Fraser got along great and Fraser made himself right at home. His owner who lived a couple hours away said he'd make it permanent the following weekend. As the next week progressed we didn't hear from the guy, he called the Saturday morning when he was suppose to bring Fraser and said that he couldn't do it. He just couldn't part with him. We totally understood and were cool with it (even though we had prepared ourselves for a new family member). Later that summer we decided to go ahead and get a puppy and Frankie joined our family. Frankie and Russ were best buds, we were a happy 2 male bulldog family.


The following year we got a call from the sister in law who stopped on the trail that morning the year before. She said that her brother in law was moving to NYC with his fiancee and the fiancee didn't want Fraser to come :( He wanted to know if we still wanted Fraser, we were the home he really wanted him to have. I told her we did get another dog and weren't sure if we wanted 3! Well, the rest is really history and Fraser came to live with us the beginning of August 2005.
﻿

He was the Bestman at our wedding!﻿ 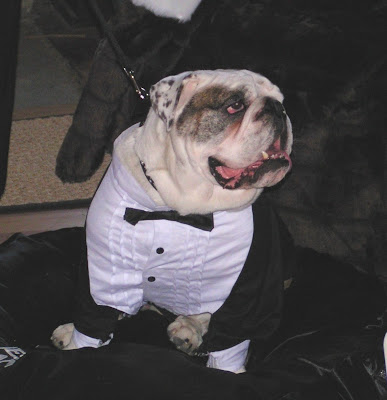 He really was the best dog, he was a devoted companion to the entire family and his dog brothers. He had a little purr whine when he wanted something, it was cute but annoying and something that I hated but will be my most favorite memory.

"I thought of you with love today but that is nothing new
I thought about you yesterday and days before that too.
I think of you in silence I often speak your name.
All I have are memories and your picture in a frame.
Your memory is my keepsake with which I’ll never part.
God has you in His keeping I have you in my heart" 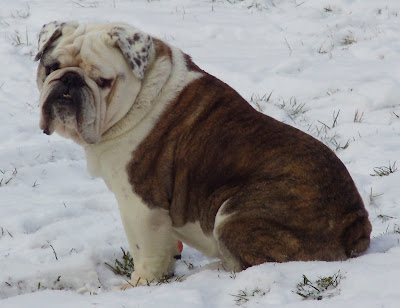