Congratulations to the 2010 State Champion Raiders! This little guy here is my baby cousin. He was the first great-grandchild in my massive brood of a family. We all love each other immensely and I can't say how proud I am of our Obby (Logan)! Nobody is called by their real name in his family - HA! Great Job and undefeated season! 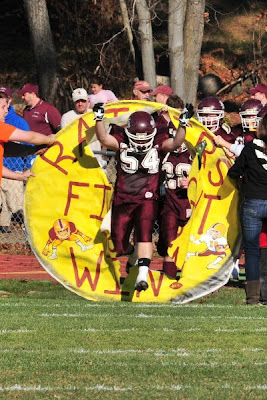 We made it to half time of the game before the meltdown occurred, I was quite surprised Asa Man made it as long as he did with no nap, but it was the lying on the ground with his face in his hands crying that was the clincher. I really wanted to get a pic with Logan and Ace - Logan is one of Asa's favorite peeps and it would of been so cute.
Posted by Jackie at 12:17 PM