The Best of Things

Here I sit guilty... Why you ask? I feel guilty because I want the best of EVERYTHING for Asa and I know that there are so many kids out there that are not as blessed as my little boy. Do I go over the top, absolutely. Somewhere in the back of my pea size brain I think that the cooler clothes Asa has the more people will except him, that they may see past his disability or that he's a cool kid with a disability! I know stupid, but I have to confess. That is what every mother of a child with a disability fears and sometimes is reality. That some people won't accept Asa for Asa because he has Down syndrome. They won't give him the chance and judge him because he is different, so if I can dress him in the event to avoid or soften judgement I will do everything I can to do that. Yes again, I know stupid, but hey that's me. I have always worn name brand, yes I am a snob and my mother and sister would agree... I'm a nice snob though!

We've been having winter coat issues. I bought a Marker jacket for Asa last year at TJ Maxx for like $30. Love this coat, it is warm but not bulky. The zipper crapped out over Thanksgiving and Grammie was kind enough to fix it - well that broke off too. I haven't given up on this coat yet because it is super cute, but I can't keep having to pull it off and on over Asa's head, so until we find a good fix for the zipper I bought a new coat. Killer deal though! Over 70% off. Burton Snowboard White Collection. His new boots are brown too so now I just need to find snowpants that coordinate - cause he's got to be the coolest kid on the playground you know! 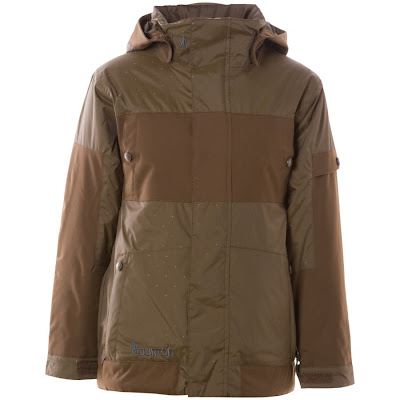 Note: Thank you Mom for his snowsuit you gave me the other day - it will be a great back-up for Daycare!
Posted by Jackie at 11:06 AM