The Terrible 3's have arrived...

Ha! I've been lazy about blogging on my days off. There is way too many other things to do like hanging Halloween decorations with Asa Man. I finally dug them out of my PARENTS garage. We had to take over part of my parents garage because we just don't have any storage room at our new house right now for ANYTHING! We plan on building a garage next year, holiday decorations were the first thing to go somewhere else...

Anyhow, I had put Asa's frog boots on him when we first went outside because with all the rain we had the end of last week the backyard was a little wet still. All I could picture was him ankle deep in mud with his brand new Adidas Sambas! So, as I'm whittling away at hanging leaf garland and making sure the ghost on a stick was facing the road just so. I catch Asa Man out of the corner of my eye come tooling around the edge of the house pushing his lawn mower - BAREFOOT! All summer we've run around barefoot outside, fine in 70/80 degrees, fantastic in 90 degrees, but yesterday was 56 degrees! Not that he would of froze to death, that's not the point, but I couldn't believe he wasn't freezing his cute little pootsters. I stop what I'm doing and say, "Hey Dude, where are your boots?" He freezes and looks at me, I reprimand with "You need to put your boots on, it's too cold to go barefoot." Well, lately I have not been getting my cute little boy responses anymore, it was a resounding "UGH" followed by a nasty "MOMMA". I knew right then and there the struggle wouldn't be worth the outcome, he was not going to freeze. If it was 46 degrees it would of been a whole other story... 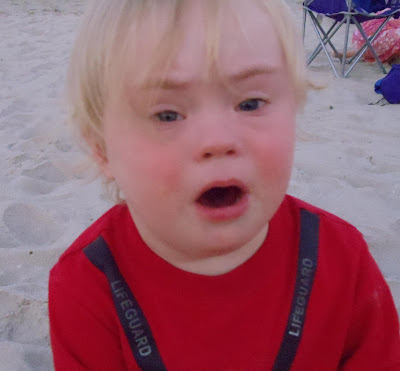 On another note - I did not get a chance to watch Monica and David the other night or even on Sunday (I fell asleep on the couch). Honestly, I'm kind of glad. I thought it was going to be an uplifting story about love and special needs, but what I've heard from other parents would of rung so true in my mind as well. Some of the comments I heard were - "It kind of made me sad, I wish they had lived more independently from their parents", other parents said it made them think and kind of forgetful of the fact that our kids are not viewed by others the way we see them in everyday life and the dreams we have for them and their future. The movie kind of made you think twice about their future like you did back when this whole journey was started. But like I've said before, it's what you make it. Who says that Asa's future is going to be like Monica and David's? We can't plan our children's future for them, whether they have a disability or not. If Asa says to me 20 years from now, "Mom, I want to break the land speed record on a motorcycle." I would say "Let's figure out how you can do it."
Posted by Jackie at 1:26 PM