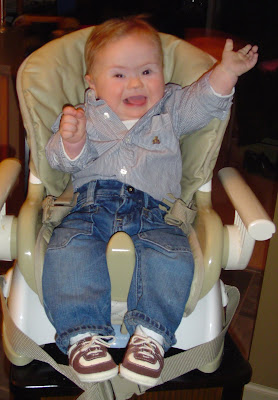 Mondays - ugh... It's the longest day of the week you know? It means there is 5 whole days before the weekend and this week is even longer cause I have to work this Saturday. Go Big Green Football!

I follow quite a few blogs and all these wonderful people who's lives you get a glimpse of really become friends. Whether we comment on each others blogs, or just watch and read from a far, you really kind of feel like you know them, in a way, thanks to modern technology... Kuddos there technology de moderne!

My "friend" April posted something on her blog that is quite profound to me. I never got over the way Asa's former pediatrician informed us of Asa's diagnosis. He called us 5 days after Asa's birth and told me over the phone Asa did have a Trisomy (and at this point anyone traveling down this road really has no idea what the heck a Trisomy is! Right?). I had all the typical pre-natal bloodwork and all my risk factors were low - I was a healthy 30 year old woman. We did not really know until Asa was born that he would have Down syndrome, but we had a small clue about half way through my pregnancy. During a routine ultrasound they did a brain ventricle measurement. Asa's right brain ventricle was measuring a millimeter larger then the norm. It was measuring 11 mm which was not over concerning, anything above 15 mm they said would be abnormal and a concern. Like I said, it wasn't anything my OB's were overly concerned with, one of them even made the comment that Asa may just have a BIG head (wasn't impressed with this one either). One of my OB's that I still love to this day because she is awesome (not the BIG head commenter) asked me if I wanted her to pick the brain (no pun intended) of a High Risk OB at our local teaching hospital - I said why not. This older gentleman who had been a doctor for a long time said that it could possibly be a sign of Down syndrome, we were flabbergasted. My fav OB was even kind of pissed he said this, especially because he was a crotchety old man. We decided to just keep an eye on it and even went through a couple 2D Ultrasounds to look for other markers of DS and there were NONE. By my last trimester Asa's ventricle was measuring normal.

The days after his birth are a blur, I remember going through the motions and doing what I had to do because Life is What You Make It you know... I've learned A LOT in 3 short years and wouldn't change anything about my little man, Perfection is Made with 47 Chromosomes.

Here is the profound statement by Bob Lincoln - on The Narretto Famly blog. Profound huh?