Day Five - This morning started off with a little boy who didn't want to get dressed and a stubborn dog who wouldn't go outside! Our first born, Russell has gotten more and more "bulldog" as he's aged. He's a pain in the butt to put it nicely. We bought him from a breeder in Texas and had him shipped to us - he had severe Kennel Cough when we picked him up. I remember sitting in a steamy bathroom 7 years ago just like I've done many a nights with Mr. Asa since. Here was this tiny puppy with green snot flowing out his little nose. Now, he's just a snot - LOL 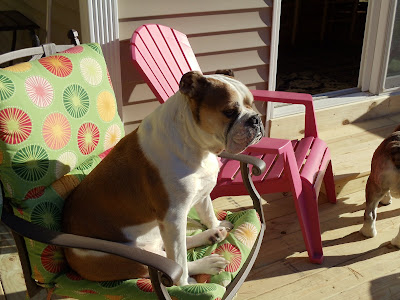 How many 60 lbs dogs do you know that always needs a cushy spot for his tushy? Asa loves "uss" almost as much as Frankie. Every morning and when we get home after work he says "Hi" to each dog. With a cheery"Hi" followed by each dogs name and he pats them on their heads or gives them a hug. Asa is very involved with his dogs, he feeds them and disciplines them every chance he gets! He's definitely highest in the pack chain of his canine brothers.

Mr. Fraser is our old man and was given to us when he was 5, I've posted pics before. He is going to be 77 in dog years pretty soon. He has the old man hack after he eats, poor boy. He still will chase a ball and show spurts of energy when playing, but mostly he lies around snoring and drooling... He will let Asa sit on him like a horse and totally tolerates him pulling, pushing, tugging and jumping on him! Bless his heart he is such a good boy. 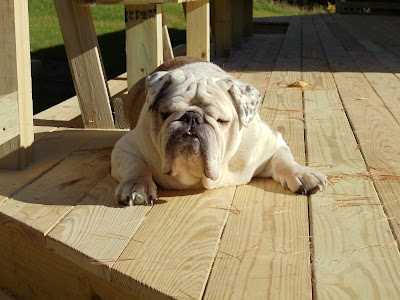 And Franklin... Frankie is a Olde English Bulldogge which is a CKC recognized breed. He's big and dumb, love this nugget. Because he's basically a mutt made up of English Bulldog, Mastiff, and American Bulldog he is a REALLY good boy. He's the Golden Child of our canine family. He listens and obeys with out hesitation - besides getting along with Russ, because they don't and have been living totally separated for 2 years. They were best buds for 4 years and then it stopped one day and you guessed it, after Asa was born... So, life goes on, just a little challenging at times. They are all a part of our family dynamic and we wouldn't know what to do with out them. 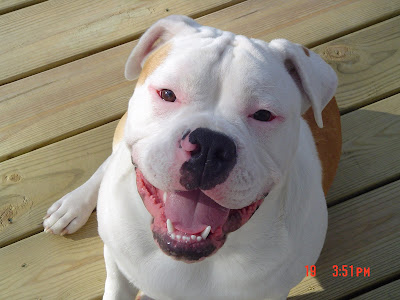